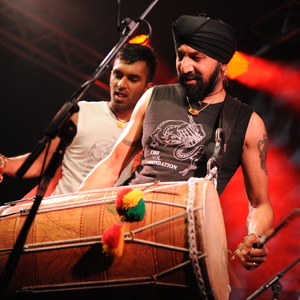 The Dhol Foundation set out to really explore the capabilities and diverse range of music from various cultures around the world. This openness to other cultures sets the group apart from other dhol groups. This is, the unique sound of the Dhol Foundation and, the reason why the dhol has ...

been exposed to cultures and countries where it has never been heard before…..TDF style! Rock, pop and electronic, drum and bass, classical elements it's all in there.

Johnny Kalsi, the UK's most celebrated player of the Punjabi dhol drum, is no stranger to audiences across Europe.  As a member of Afro Celt Sound Sytem, Imagined Village and Trans-global Underground he’s featured in more bills than most.  But it’s The Dhol Foundation that’s his pride and joy, the organisation that delivers a now legendary wall of sound, global rhythms and thumping contemporary beats with the effervescent Johnny at the heart of their live shows.

The full stage show features an energetic batteria of dhols up front, bass, drums, guitar, dholak and can include bhangra dancers and guest singers powering out a sound that’s as eclectic as it is forceful.  TDF The musical influences are drawn from a rich pallet of global sounds and it’s the openness to exploring the music of other cultures that has always set TDF apart from other Dhol groups.

The band have featured in the music of Hollywood films, Gangs of New York and The Incredible Hulk.  They have also worked with Peter Gabriel on the soundtrack for films including Rabbit Proof Fence and The Last Temptation of Christ.

The Dhol Foundation performed as the opening act with STOMP at the Royal Variety Performance which was screened on ITV1 in December 2011. Peter Kay hosted the star studded event which also featured Tony Bennett, Barry Manilow, Cee Lo Green, Nicole Scherzinger and Pixie Lott. The show was staged at The Lowry on Salford Quays and also on the bill were comedians Jason Manford, Greg Davies and Tim Minchin.

TDF played before their biggest ever crowd at the London 2012 Closing Ceremony in August 2012 when they built up an insistant percussive undercurrent to the soundtrack of 'Running up That Hill' by Kate Bush, an spectacular event watched by millions of viewers worldwide.

Dhol drum masters The Dhol Foundation at The Sinclair 9/25

North American audiences are in for a powerful new experience this fall, as England’s The Dhol Foundation launch their first North American tour.  Led by master drummer Johnny Kalsi, the ten-piece multi-instrumental collective will bring their tunefully thunderous performances to eight stages:

London-born Kalsi founded the group in 1989, and has travelled the globe to promote broader awareness of the deeply resonant, colorfully-tasselled, double-headed dhol drum, a musical backbone of his Sikh family’s ancestral Punjabi culture in India.  As a respected ambassador for the rich multi-culturalism of today’s United Kingdom, he has hosted stages at Peter Gabriel’s acclaimed WOMAD world music festival for many years, as well as co-hosting with Gabriel at the historic Live 8 at Eden event, which highlighted the scarcity of African music at Live Aid.  Honoring his tireless work, Kalsi was named a Fellow of the prestigious Leeds College of Music in 2015.

The Dhol Foundation were a prominent feature of the official Closing Ceremonies of the 2012 London Olympic Games, as well as at the Jubilee Celebration of Queen Elizabeth II.  They have played major venues throughout the world, from London’s iconic Albert Hall to festivals in Abu Dhabi and Singapore.  Their music has appeared in such major motion pictures as Gangs of New York and The Incredible Hulk, and in January they were selected to make their first North American appearance at the juried Globalfest showcase event at New York City’s Webster Hall.

However, Johnny Kalsi is no stranger to world music fans in the U.S. and Canada.  His blazing performances have burned up stages across North America in his other incarnation as longtime lead percussionist for the perennially popular Afro Celt Sound System; his incendiary segments are dynamic visual highlights of the group’s legendary live shows.

His sensational drum work will appear on forthcoming new albums this winter from both Afro Celt Sound System and The Dhol Foundation.

Onstage, The Dhol Foundation present a colorful spectacle – “a brightly dressed groove machine, of whirling arms and booming beats.”  The sonic flavors they concoct are likewise multi-hued, vibrantly blending folk sounds from India, Brazil, Ireland, Morocco, and West Africa with bhangra as well as modern electrobeat elements that reflect Johnny Kalsi’s work with the likes of TransGlobal Underground and Asian Dub Foundation. Their sound is hypnotic and sensuous, fluid yet impeccably precise.  It bespeaks the deep, celebratory heritage of the dhol drum in traditional Punjabi  life, where the large cylindrical wooden drum with two goatskin heads -- one treble, one bass, played with cane drumsticks -- accompanies the rituals of harvest and other milestones of life.  (During the Mogul empire of the late 16th century, the drum was also legendary for fiercely leading troops into battle and intimidating their foes.)

But, at the same time, it gives voice to the fruitful assimilation of South Asian ethnic traditions into mainstream British culture.  As such, the group was selected for funding by England’s Asian Arts Agency (Bristol UK) and are presented, through these concerts in the United States and Canada, as emissaries of cross-cultural understanding and cooperation.   In this era when xenophobia, bigotry, and hatred seem to be on the rise around the globe, the timing could not be better for the mighty Dhol Foundation to open the floodgate on a torrent of percussive grooves and share their exuberant message of tolerance and goodwill.

As one of the UK’s premier development agencies, the Bristol-based Asian Arts Agency develops, commissions, and produces a range of arts and music events. This includes events and tours, international work, programming for festivals, digital exhibitions, artist development, and education and participation activities. We work with audiences from wider communities and all age groups at community and mainstream venues and festivals. The approach is inclusive, seeking to engage not only all of the South Asian communities, but also to share South Asian arts with the wider community.

The Asian Arts Agency has a 15+ year track record of delivering high quality artistic activity. Over the last few years it has delivered extraordinary programmes including more than 500 events reaching nearly 300,000 people as participants and audiences, working with nearly 200 organisations and partners.